The renowned, award-winning artist has put her talents to work for the betterment of society and she has been carrying out this noble work along with managing her family.

The project, of creating an aesthetically appealing skyline called ‘Misaal Mumbai’ is an initiative by her. Rouble has been working in and around Mumbai’s slums for the past decade or so.

Under the Misaal Mumbai initiative, she started a project called ‘Paint Dharavi’ in 2012 and carried this forward to other areas like Jaffer Baba Colony and Mount Mary in Bandra West, Dhobi Ghat.

The slums in the city were painted in an aim to change the mindset of people. The result was an explosion of rainbow hues that would be visible from far away, stretching from one dwelling to the next in a wave of unexpected energy. 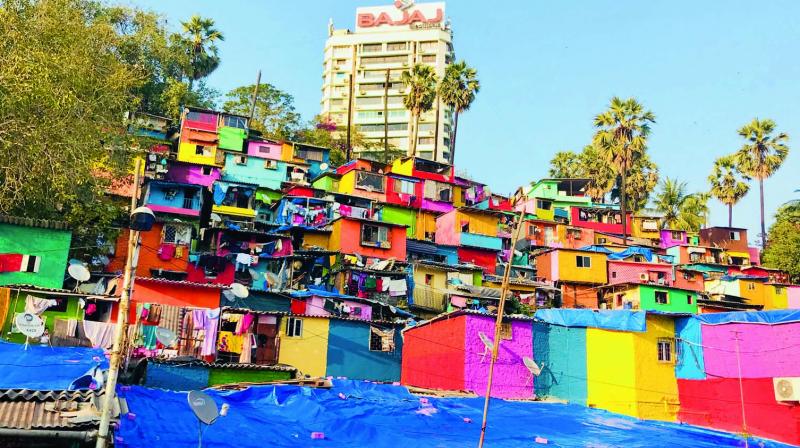 Talking to ANI, the founder of the NGO, Rouble Nagi said, “I want to connect to these people through arts. Our main aim is not to colour the walls but bring a change in their mindset.

Slums in Pune being coloured under ‘Misaal Mumbai’, an initiative of Rouble Nagi- a Mumbai-based artist & founder of NGO Rouble Nagi Art Foundation; Nagi says,”I want to connect to these people through arts. Main aim is not to colour the walls but bring a change in their mindset” pic.twitter.com/snFRH6lFeD

“When I paint 20 walls here, 200 people come and stand with me. If I go to their home as a social activist and try to help, they will have that speculation about who I am. So we start with colouring, they come out of their homes and that’s when we tell them what we want to do,” she added.

Rouble Nagi: When I paint 20 walls here, 200 people come & stand with me. If I go to their home as a social activist&try to help, they’ll have that speculation that who is she. So we start with colouring, they come out of their homes, & that’s when we tell them what we want to do pic.twitter.com/68WTKYReVd

The main aim of this initiative is to improve the quality of life for poor people living in slums, by providing more hygienic living conditions, beautifying techniques to personalize their homes, along with repairs, waterproofing roofs and improved sanitation. Along with a team of local painters from the area, Rouble executed the painting after discussions with the residents.