by Online Reporter
in News, Sports
0

With nearly a fortnight remaining for the ISL 2018, the fifth edition of the tournament suffered a dip in star quotient when iconic cricketer Sachin Tendulkar ended his four-year association with Kerala Blasters selling his remaining 20 per cent shares in the club to other co-promoters.

A conglomerate of Telugu super stars Chiranjeevi, Nagarjuna, producer Allu Aravind and industrialist N Prasad, who owned 80 per cent of the Kerala Blasters’ share, bought the rest of the 20 per cent from Tendulkar on Sunday (September 16). Initially, Tendulkar had owned 40 per cent of Blasters before selling half of them to the aforementioned group.

But it was not a decision the cricketer arrived in a flash but rather it was a well thought out move to keep away from a venture that was not yielding a good deal of profit for him. It has been reported that the ISL clubs are running under loss into their fifth year of existence and the time frame has been expanded to 2022 to break even or make profit. It’s no secret that the collective loss of ISL clubs stands a shade over Rs 100 crore. 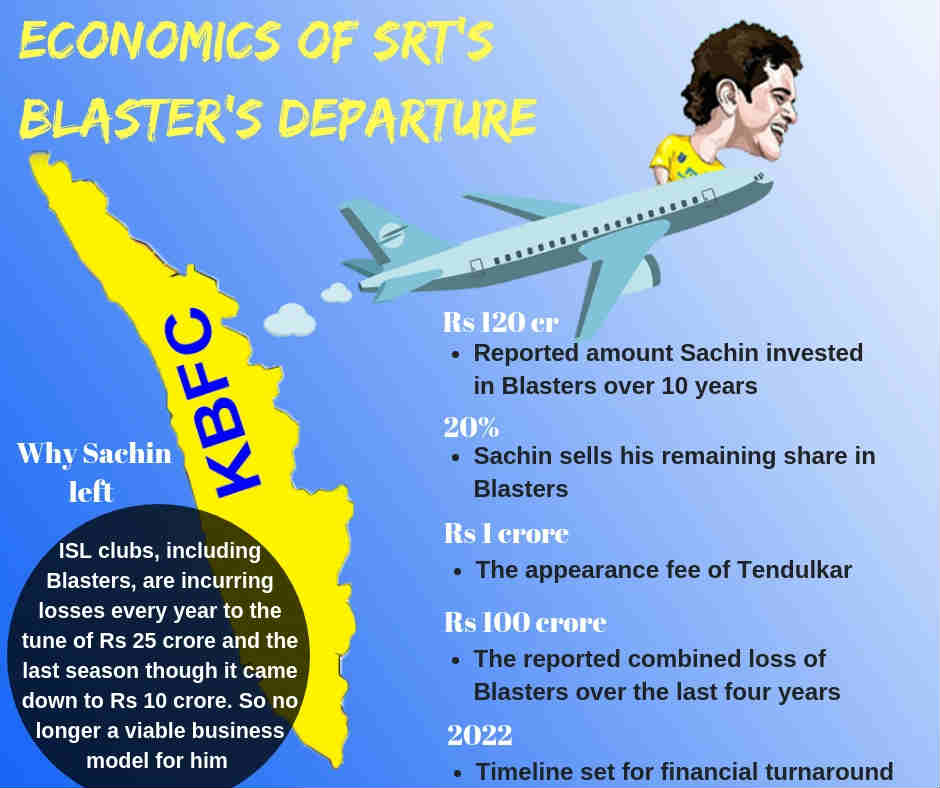 In that scenario, Tendulkar, who recently started a cricket academy in association with English county Middlesex, was not very keen to continue his association with Blasters, whose own loss ran to nearly Rs 15 crore in the 2017 season. It may be also a reason that prospective buyers can hold negotiations with a single group of investors than having discussions with multiple heads. Though there is no effort to sell the club at present, it is believed that the Blasters will be up for sale in some time to come.

However, Tendulkar, who charged Rs 1 crore as appearance fee, might continue in the capacity of a brand ambassador of the Blasters as the legendary batsman has been a definite crowd puller in the past seasons.

“In its fifth year, it is important that the club puts the building blocks for the next five years and beyond. It is also a time for me to reflect on the role that I should play. After reflecting and much discussion with my team, I have decided to exit my association with Kerala Blasters as a co-promoter,” Tendulkar said in a statement.

“I strongly believe that Kerala Blasters is in very good shape and on its path to attain many more successes with the backing of its fans offering unconditional support. I am very proud of Kerala Blasters and a piece of my heart will always beat for the club,” he said.

Are you a person speaking more? then you have better love lifes