"After the Kerala floods, the situation has worsened as landslides and the overflow of rivers have set route for invasive species to move around easily," Hriteek pointed out.

The post-flooded areas of Kerala is under the threat of invasive plant species now. Researchers reveal that the intense growth of invasive alien plants has posed serious environmental issues in Kerala.

These weeds are creeping into the barren lands of the state. Though this is a world wide and long term phenomenon, scientists seek immediate action on this issue. The Kerala Forest Research Institute (KFRI) has undertaken a study on this issue.

The invasion of alien plants mainly happens in forest, or barren lands and in agriculture areas. Invasion in agriculture fields is usually prevented to an extent due to constant weeding and proper care. But invasion in forest areas and other lands is a significant problem as it negatively impacts the native species and ecological balance according to KFRI. The institute has been organizing many programmes on this regard to tackle the invasion of alien species into the protected areas.

T.K. Hrideek, a scientist from KFRI in Genetics and Tree Breeding told Mongabay that all the forest areas in the state are under this threat. Eupatorium cannabinum, Hypoestes phyllostachya, Lantana camara, Maesopsis eminii, Mikania micrantha and Senna spectabilis are some major alien plant species that invade forest regions as well as wildlife sanctuaries.

KFRI’s survey revealed that Senna spectabilis commonly known as ‘Manja Konna’ shows an increase of more than 10 percent from 2015. “They were planted as avenue trees along roadsides in the state. But soon spread into wildlife sanctuaries as well as in plantations due to their high invasive nature. Allelochemicals produced by Senna spectabilis prevent germination of many native species,” Subi, a research scholar at KFRI said. “During the floods through tributaries of Kabani river, Senna seeds were dispersed,” she added. 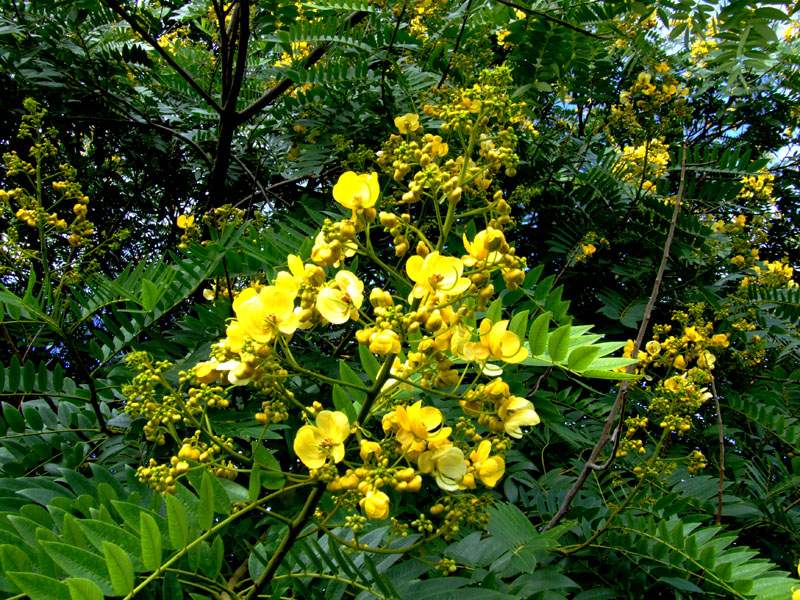 You must be wondering how these alien plant species pose threat to the native species and eco-system. These species directly affect the germination process, diminishes the quality of soil and underground water availability which in turn change the eco-system, food chain and impact the lives of wild animals too. In Kerala, this trend of invasive plants has affected the ecotourism and the livelihoods of the indigenous tribal communities.

“The forest regions in the state, including Wayanad Wildlife Sanctuary, have got a number of invasive plants and trees. The situation is similar in other protected areas too. At present people may not realize it, but later tourists may not experience the forest they desire. It might look like a plantation. There will not be any animals as they cant feed on these invasive species,” said Hrideek of KFRI.

“Communities who collect certain grass, fruits, honey, bamboo or medicinal plants for livelihood are badly affected through this invasion. Some invasive creepers can also prevent the easy movement of these indigenous people inside the forest,” he added.

Hrideek also pointed out that the food scarcity and habitat change caused by this invasion can be one of the reasons for animals crossing forest limits and appearing in human-occupied areas. “Most of the invasive trees will have attractive flowers that can lead to an easy pollination of them by insects. Through this pollination, native species are neglected and these exotic species get spread easily,” he added, citing such uncontrolled invasion can cause economic loss along with environmental issues.

“Weeding in agriculture land and weed removal in ponds and other sources costs us a lot. But we don’t realize it as a major issue,” he explained.

The KFRI and forest department have organised various drives to eradicate invasive species and bring awareness. There have been frequent drives to uproot Senna spectabilis and promote native species of grass, bamboo, medicinal plants and trees.

“After the Kerala floods, the situation has worsened as landslides and the overflow of rivers have set route for invasive species to move around easily,” Hriteek pointed out. “Many invasive species that are found in mountain regions were spotted in plains after the flood. They can grow easily even in adverse environment, but native species may not sustain situations like landslips. Landslides have helped plants like Mucuna bracteata to reach protected forests,” K. Muraleekrishnan, a research scholar with KFRI said.

Hriteek pointed that this threat from invasive plants should also be considered along with reconstruction measures of the state after flood.