Protest welcomed Indian Prime Minister Narendra Modi to London. Protests Spurs in the country for governments policies and Kathua and Unnao rape case, and violence against Dalits and religious minorities in India. The large-scale protest at London’s Parliament Square has been organized by British Sikhs and Kashmiris to protest against the government’s policies.

Modi is on a four-day visit to the country to attend the 2018 Commonwealth Heads of Government Meeting in London. Heads of 53 Commonwealth nations, including Pakistani Prime Minister Shahid Khaqan Abbasi, will attend the Summit in London and Windsor. Several, including Kashmiris and Indian origin Sikhs, Christians and Dalits, raised slogan against Indian PM and demanded justice. 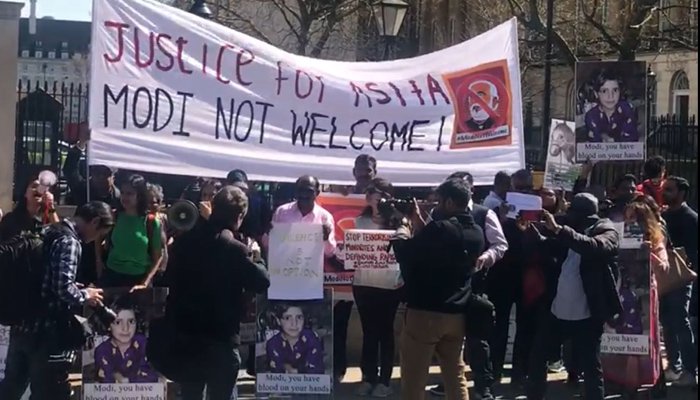 There was protest against Modi on his 2015 London visit. Sikh organisations were behind the 2015 protest. Its second time Modi visiting UK. Modi came to London after his visit to Sweden. On the contrary there were rallies happening in London in support of Indian Prime Minister that Anti- Modi protest is conducted by Pakistan support.