First time in the history of Vatican, A Pope to Visit Arabia

Pope Francis is set to write a new chapter in Vatican history by announcing a visit to United Arab Emirates. According to Vatican officials, Pope will conduct a papal visit in 2019 February 3-5. 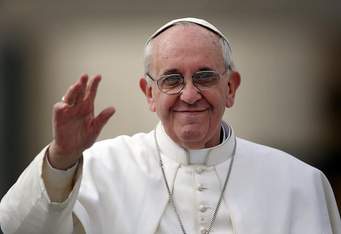 The Vatican press release shows that he will participate in the International Interfaith  Meeting on ‘Human Fraternity’ in Abu Dhabi.

The  Abu Dhabi Crown Prince Sheikh Mohammed bin Zayed Al-Nahyanto who during his Vatican visit in 2016, invited Pope to visit Islamic reigned UAE.The 81-year old pope has already visited several Muslim countries, including Turkey in 2014, Azerbaijan in 2016 and Egypt in 2017.

The Dubai Ruler, Vice President, Prime Minister of the UAE , Sheikh Mohammed bin Rashid Al Maktoum,, appreciated the decision in a Facebook post on Thursday: “We welcome the news of Pope Francis’ visit to the United Arab Emirates next February – a visit that will strengthen our ties and understanding of each other, enhance interfaith dialogue and help us to work together to maintain and build peace among the nations of the world.”

Moreover the theme of the Papal visit has been chosen as, “Make me a Channel of your Peace,” after St. Francis of Assisi.

The goal for Pope Francis’ visit is to spread “the peace of God within the hearts of all people.”

New logo published by Vatican for the visit also bears the colours of both the Vatican’s and United Arab Emirates’ flag. In short, 10 percent of  catholics in the UAE population are in great pleasure by this announcement.

Volkswagen is All Set to Electrify in 2026