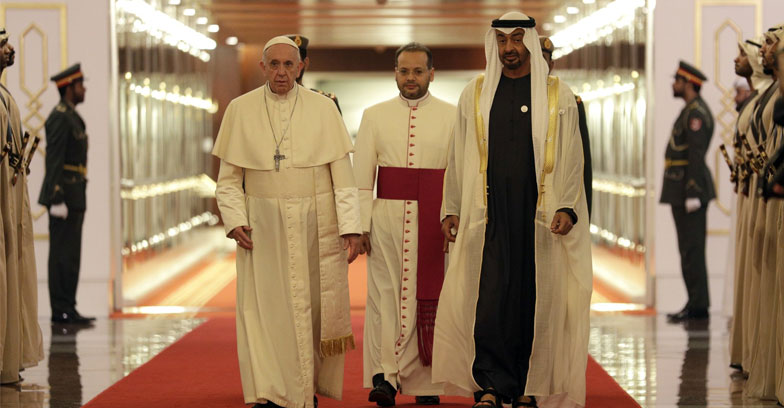 Francis earlier Sunday called for the urgent observation of a limited cease-fire in Yemen reached in December and for food and medicine to get to its people, who are suffering the world’s worst humanitarian crisis.

Abu Dhabi’s crown prince, Sheikh Mohammed bin Zayed Al Nahyan, welcomed pope at the airport,greeted him with smiles along with Cabinet ministers and an honor guard when he landedin shepherd 1 Boeing flight,  around 9:50 p.m. in the Emirati capital.

Francis traveled to Abu Dhabi to participate in a conference on interreligious dialogue sponsored the Emirates-based Muslim Council of Elders, an initiative that seeks to counter religious fanaticism by promoting a moderate brand of Islam.

“I am pleased with this meeting offered by the Lord to write, on your dear land, a new page in the history of relations among religions and confirm that we are brothers despite our differences,” pope said.

Pope Francis will likely focus on issues of religious freedom and fraternity in his public remarks. Unlike all his other foreign trips, he will not deliver a political speech in UAE.