France’s soccer coach will have a subway train station named after him to celebrate his World Cup win and poet Victor Hugo will have to share his memorial slot on Paris’s transport map with the team’s goalkeeper and captain.

As “Les Bleus” headed home with the World Cup trophy on Monday, the French capital’s RATP transport authority said it was renaming six metro subway stations in their honour for the day.

Didier Deschamps is one of just three men in the history of the World Cup to take the trophy as team coach after winning it as a player – he helped the team to its first victory in the tournament in 1998. 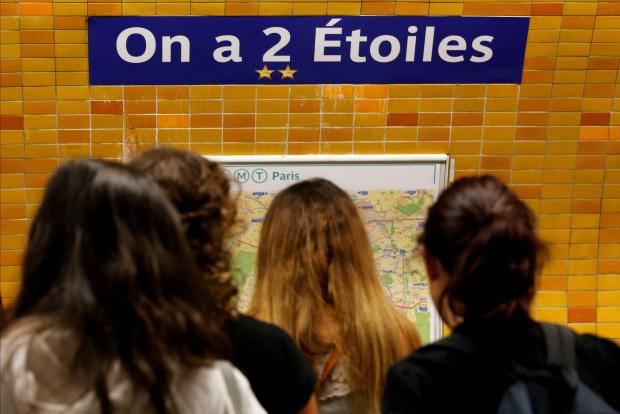 A metro sign ‘Charles de Gaulle – Etoile’ renamed ‘On a 2 Etoiles’, dumping the name of the wartime leader in favour of a phrase in French meaning ‘We have two stars’ one for each World Cup win is seen at a subway train station in Paris, France, July 16, 2018. Reuters
Victor Hugo station is being renamed Victor Hugo Lloris after captain and goalkeeper Hugo Lloris.

“Les Bleus” are returning on Monday from World Cup host country Russia to celebrate their victory with a parade on the Champs Elysees.

At one end of that avenue another subway stop called “Charles de Gaulle – Etoile” is being renamed “On a 2 Étoiles”, replacing the wartime leader with the boast “We have two stars”, one for each World Cup win.

With demand for the French team jersey surging, police urged crowds to move away from the entrance of the Nike shop on the Champs Elysees early on Monday.

England, which surprised many by getting as far as the semis, has changed Southgate station on the London Underground to Gareth Southgate Station in honour of the national coach.