Editorial also points out modi how the reaction of UPA government on Delhi rape case protest effected in 2014 elections. It also asks modi about his election manifesto. Editorial criticized Prime Ministers pattern how he keep silence on crime committed by his supporters. Editorial also puts a question on Indian democracy.

The New York Times editorial ends by saying Modi has a duty to safeguard and fight for all of the people, not just those who are allied with him politically. 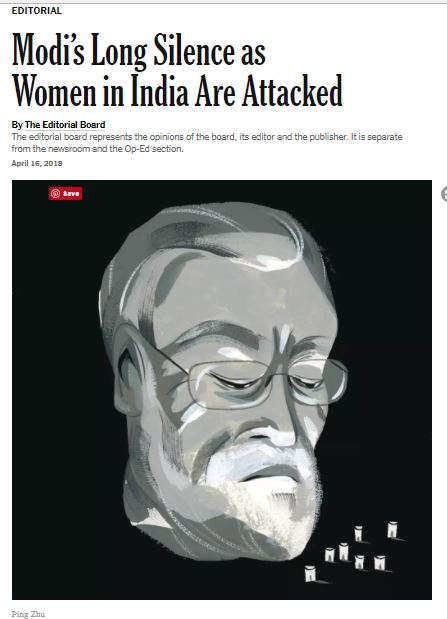 Prime Minister Narendra Modi of India tweets frequently and considers himself a talented orator. Yet he loses his voice when it comes to speaking out about the dangers faced by women and minorities who are frequent targets of the nationalist and communal forces that are part of the base of his Bharatiya Janata Party.

Indians took to the streets during the weekend to protest their government’s callous response to the horrifying rape and murder of an 8-year-old girl in January in which supporters of his political party have been implicated. Mr. Modi, though, has barely spoken about this crime and other cases involving his supporters.

Until last week, he declined to address the attack on the girl, in the northern state of Jammu and Kashmir, by men who wanted to frighten and drive away her nomadic Muslim community, the Bakarwals, from an area that is dominated by Hindus. To read about what happened to the girl, who was held and abused at a Hindu temple, over several days is to plumb the depths of human depravity.

As Mr. Modi remained quiet as public outrage built up for weeks, state lawmakers from his party, which is part of a coalition that governs Jammu and Kashmir, attended a rally in support of a man who had been arrested for the crime and joined in demands by locals that the investigation be taken away from state officials, some of whom are Muslim, and be turned over to federal authorities. After a mob of Hindu lawyers temporarily prevented the authorities from registering charges in court, officials have formally accused eight men, including policemen and a retired government employee.

Mr. Modi has also been reluctant to talk about a rape accusation against a state lawmaker from his party in India’s most populous state, Uttar Pradesh, which is governed by the B.J.P. A teenage girl says the lawmaker raped her last summer, but until recently the police have dragged their feet in bringing charges against him. He and his brother are also accused of conspiring to kill the girl’s father, who was found dead in police custody.

On Friday, Mr. Modi said that these cases had brought shame on the country and that “our daughters will definitely get justice.” But his remarks ring hollow because he waited so long to talk about the cases and spoke in broad generalities — describing the crimes as “incidents being discussed since past two days.” He has taken a similar approach in the past when addressing cases in which vigilante groups affiliated with his political movement have attacked and killed Muslims and Dalits — members of India’s lowest caste — who they falsely accused of killing cows, which are sacred to Hindus.

Mr. Modi’s silence is as perplexing as it is distressing. He seems to have failed to learn the lesson of his predecessors who did not forcefully respond to protests in late 2012 and early 2013 after a young woman was raped and killed on a public bus in New Delhi. That government, which was led by the Congress party, paid a heavy political price for its heartlessness in the 2014 parliamentary elections; the B.J.P. won the elections in large part because Mr. Modi promised to make the government more responsive to the needs of Indians who were left behind by a government dogged by corruption scandals and widely considered rudderless.

Instead, he has exhibited a pattern of silence and deflection that is deeply worrying to anybody who cares about the health of the world’s largest democracy.

Mr. Modi cannot be expected to discuss every crime committed by someone who supports him. But these cases are not isolated or random examples of violence. They are part of an organized and systematic campaign by nationalist forces that want to terrorize women, Muslims, Dalits and other underprivileged citizens.

The prime minister has a duty to safeguard and fight for all of the people of India, not just those who are allied with him politically.