Near to Anna, Dravida Leader Karunanidhi rest in Marina

It was 4 pm on Wednesday and time for the last of the tallest leaders in Tamil Nadu and the DMK patriarch Kalaignar Dr M Karunanidhi’s final journey to his place of rest. A gun-carriage drawn hearse bearing Karunanidhi’s coffin trudged through a sea of emotional mourners from Rajaji Hall in Chintadripet to the Anna samadhi at the Marina beach.

As the cortege moved down the Chintadripet-Wallajah Road, loud cries and grief hung heavy in the air in Chennai. While some attempted to move closer to the hearse, others simply waved their hands at their Kalaignar, one last time. 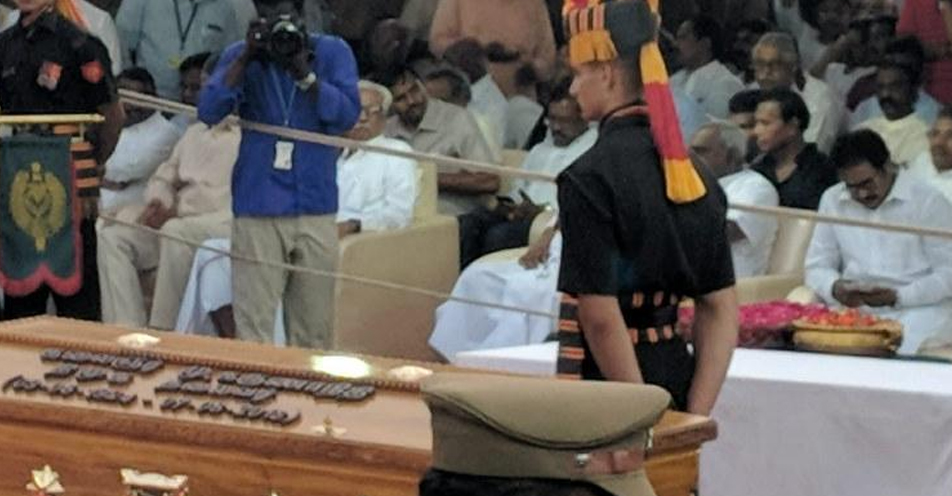 Karunanidhi’s family members, including MK Stalin and Kanimozhi, along with other key functionaries of the DMK party, followed the funeral procession, while MK Alagiri was overseeing works for the burial at the Marina.

As the burial spot for Kalaignar was being prepared at the Anna Samadhi, the DMK family members, party leaders and other dignitaries started occupying the seats at the canopies erected near the spot where the final rites would be performed.

The former five-time Chief Minister was accorded all state honours which included the 21-gun salute by the armed forces. Jawans from all the three wings of the armed forces paid their respects to the leader.