by Dayana Antony
in Kerala, News
0

Mani the Chairman of Kerala Congress died in Kochi at the age of 86,reached his Karingozakkal residence at Pala.

On the way to the home,hundreds of people gathered to have a look at their favourite politician,the politician of Kottayam. 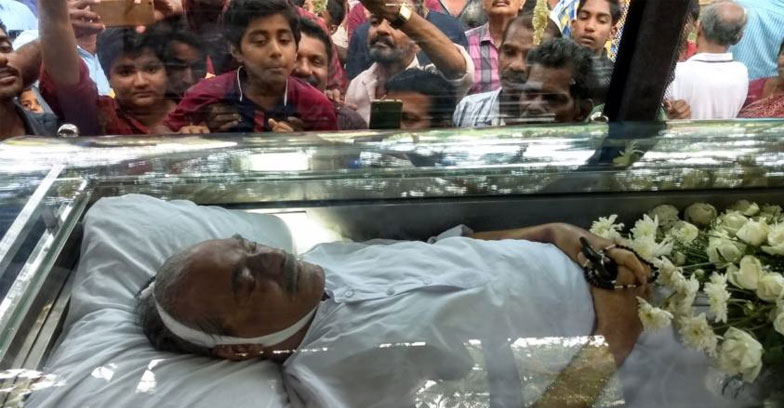 “Shri KM Mani was a stalwart of Kerala politics. His impeccable electoral record indicated his deep connect with the citizens of the state. His rich contribution to the state will be remembered. Pained by his demise. Condolences to his family and supporters. RIP.” said Prime Minister Narendra Modi on twitter.

In a career spanning 51 years, Mani was Kerala’s finance minister for 13 times, the longest in history, and was also the country’s longest-serving legislator. He represented his native place Pala in Kottayam since 1965.

His popularity and influence in central Kerala districts, especially among entrepreneurial Catholic classes, were unparalled, making his Kerala Congress party almost synonymous with his name. He became the most sought after ally for both Congress-led United Democratic Front and communists-led Left Democratic Front.

“In addition to his political gravitas, I was greatly impressed by Mani’s theory of the toiling class, a group he situated between wage labourers &the petit bourgeoisie. comprising tea sellers, fruit/vegetable vendors,&self-employed: he highlighted their cause&fought for them,”tweeted Kerala MP and writer Shashi Tharoor.

He was probably the only politician to have headed several of the key departments in Kerala, and was known as someone who knew the “Practice and Procedure of Parliament”, the bible for lawmakers in India, by heart. The firm grip on governance also extended to his understanding of real politick.

The final funeral prayers for the veteran leader will start at 2pm on Thursday at home and will get laid to rest at Pala Cathedral Church at 3pm with full state honours.

Congress complaints about plot to assassinate Rahul Gandhi at Amethi