‘I was not nervous or scared’: Airlifted pregnant woman Sajitha recalls flood ordeal

There was hooting and clapping. Little children were shouting, worried-looking old people were offering support. One person could be heard shouting to god loudly. Everyone on that terrace – several hundreds of people – were doing everything they could to catch the attention of the helicopter flying past.

When it did and four or five men dropped down with a rope to pick her up, Sajitha Jabil was neither nervous, nor scared, like the many who would watch the video of her airlifting later. All she thought of was to somehow reach a hospital, any hospital. She was about to have a baby – the water had broken the night before and there simply was no time.

That same day, at 2.15 pm at the Sanjivani Hospital in Kochi Naval Base, Sajitha had a baby boy. A commanding officer of the Navy – one among the many who saved her and later looked after Sajitha – would name the child Subhaan – Mohammed Subhaan. “And Subhaan means famous,” says Sajitha when we call her on the day she finally reaches home from the hospital. 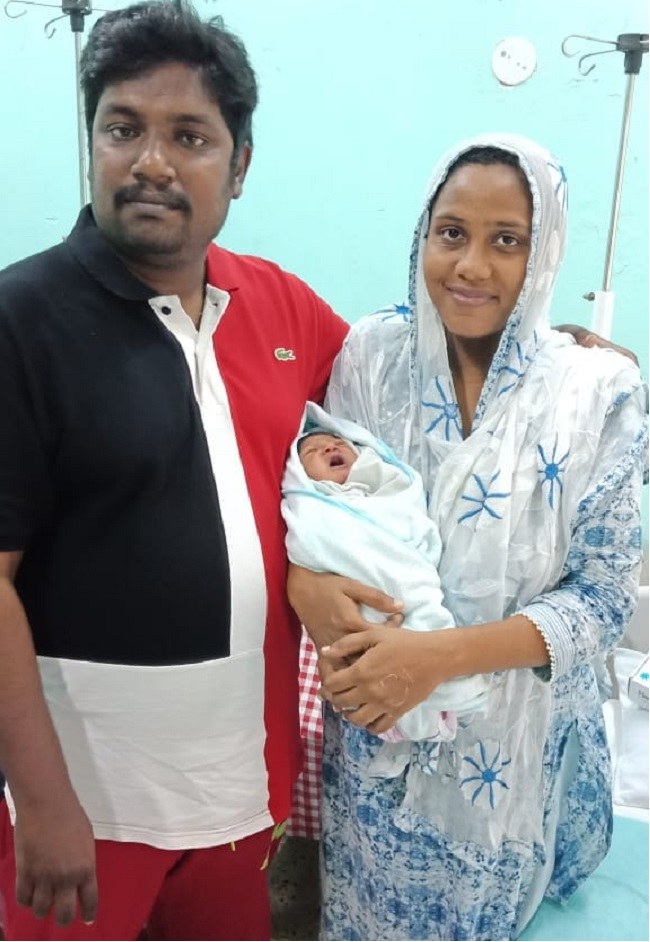 The baby is already famous, born at the time of the ravaging floods of Kerala, on a day his family got stuck on the terrace of a mosque in Aluva. “It’s the Hidayathul Islam Madrassa in Kondotty, Aluva. We went up there on the night of the 15th when everyone in the neighbourhood were warned to leave their houses. It was not bad till that evening but water came within an hour. We took only what was most urgent and climbed up to the terrace. We watched the water fill the first floor and slowly rise through the second floor,” Sajitha says.

Sajitha Jabil, the pregnant woman who was airlifted from the top of a terrace in Kondotty, Aluva during the #KeralaFloods …. was remarkable talking to her about the experience. This is the video she sent. pic.twitter.com/3PGReJe9FM

By 16th night her water broke. Everyone around her got worried. There were people of all ages, all religions. A nurse working at the KMK Hospital was also there, getting instructions from doctors on the phone to do the needed in case Sajitha had to give birth on the terrace. “My doctor Rehana of the Aluva Govt Hospital and Dr Shimna from Manjeri were talking to her,” Sajitha says.

Calls went out, to Anwar Sadath, MLA, and to the District Collector. But they could reach no one for a long time. “It is then that we called a relative, a cousin’s wife, who works in the Navy. She made a few calls and a helicopter went out looking for us. But it was difficult to locate the madrassa. That’s why everyone started shouting and clapping and making noise,” Sajitha says.

Commander Vijay who had headed the operation conducted on a Chetak helicopter. “The operation was very risky because of multiple challenges. One, the area we had to rescue her from was very congested. The roof was converted into a shelter and this was a balcony where we had to lift her from. Two, the wind tends to come from different directions with buildings around. And the weather ensured that it was quite windy. The Chetak is a light helicopter so it can get pushed around by the wind,” Commander Vijay had said.

A doctor too had come along with the commanding officers and told her not to be afraid.

Sajitha reached the hospital by 9.30 am. At 2pm, the labour pain started, and 12 minutes later, Subhaan was born. “This is my third child, and it was a normal delivery,” she says. All three are boys – the first is four-year-old Mohammed Naeem and the second, Mohammed Nuaym, is one-and-a-half.

It is a day later that she meets her husband Jabil.

For the next 12 days Sajitha had many visitors. She can’t remember all the names, but even on the last day an officer’s wife from Delhi had come and given a gift. The commanding officers that saved her had brought along fruits and sweets and a memento for the brave mother and child.

It is only on Tuesday when she comes home to Kondotty that she meets the rest of the family. She is happy now, after many overwhelming days of finding herself on television news. But there will be a lot of running around to do now, three little boys are quite a handful.

Revolution of volunteerism; Over 90% flood-hit houses fit to stay