'Bumblebee', the science-fiction is genuinely surprising how different this new installment is from previous Transformers flicks.

The latest Transformers series Bumblebee is contained in a multi-car pile-up. It’s been 11 years since director Michael Bay’s first entry in the series, and with each new one, he seemed to set new standards in onscreen cacophony. Now, finally, the franchise has switched directors- to the somewhat unlikely Travis Knight, of the independent stop-motion studio Laika. His previous effort was the delicately melancholy animated film Kubo and the Two Strings, and he was also lead animator on such creepily charming pictures as Coraline, The Boxtrolls, and ParaNorman.

The science-fiction is genuinely surprising how different this new installment is from previous Transformers flicks. The movie even seems to nod to that idea, with an inspired bait and switch right at the beginning. It opens in the middle of a huge, apocalyptic war on Cybertron (the Transformers’ home planet), with explosions and chaos and flying robots everywhere.

Amid this cataclysm of steel and fire, Autobot Resistance leader Optimus Prime sends his loyal lieutenant Bumblebee, then known as B-127, off to a newly discovered planet called Earth to protect its people and await his comrades’ arrival. So the robot zooms off into space. But two of the evil Decepticons also make their way to our planet.

But the Bayhem largely stops there. Instead, the rest of the movie plays like a robot variation on E.T. The Extra Terrestrial, as we’re dropped into the uneventful world of awkward Bay Area teen Charlie (Hailee Steinfeld). She works the hot-dog stand at a local amusement park, and is still wrestling with the recent loss of her dad and her mom’s decision to move on to a new man. Eager for a new car on her 18th birthday, she finds Bumblebee, now posing as a decrepit yellow Volkswagen Beetle, in a lot filled with discarded vehicles, and immediately decides she wants him. Soon enough, the sentient giant fighting-robot car from another galaxy is awakened, and the bewildered girl tries to learn more about her alien automobile.

Hailee Steinfeld, the Oscar nominated talented actress plays the role of a teenager mourning for her dead father, and unable to accept just how quickly her mother (Pamela Adlon) has moved on. 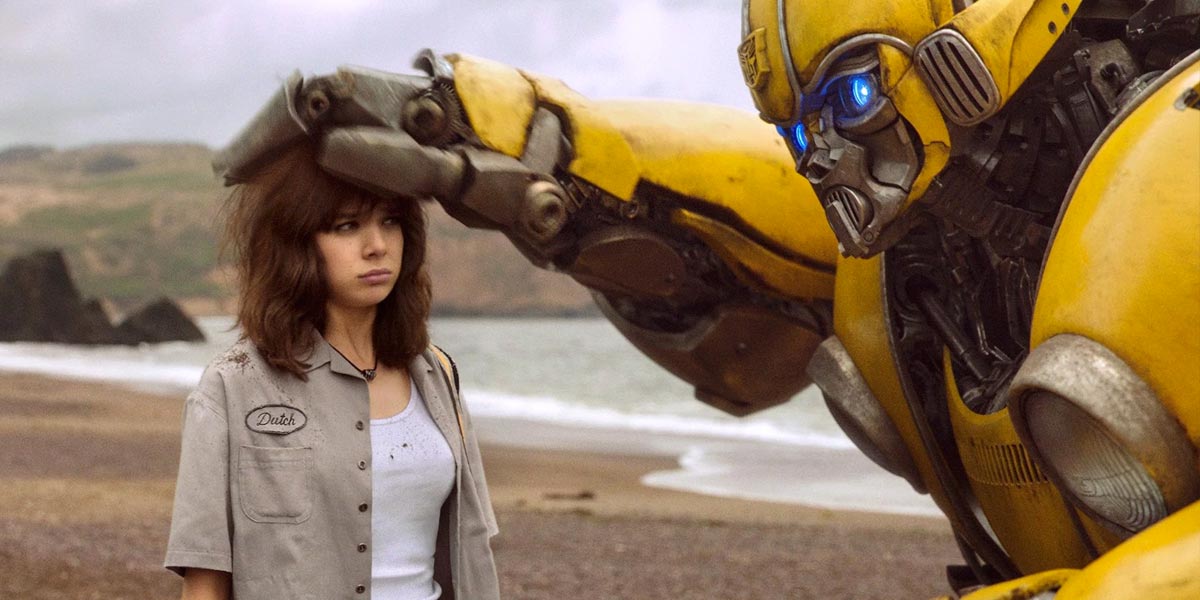 What’s most admirable about Bumblebee is that it gives us a real sense of this girl, with her cool band T-shirts and her unreconciled feelings of life in the fast lane and her general clumsiness.

Even the constant, slightly-too-insistent soundtrack of 1980s pop hits feels justified when considered in the light of a confused, impatient teenager’s whipsawing moods. Knight and his team made sure that their audience always know where everything is, and how far.