Life snatched away her feet and hands, but that’s not stopping Shalini Saraswathi from Bengaluru, who gains attention as a cover girl now.

Vanitha, a leading Malayalam magazine selected the brave and bold Shalini as its cover girl for the May edition. The magazine’s online edition also released a video of her photoshoot.

Shalini Saraswathi, lost both legs, and hands, to a rare bacterial infection. She is an engineer by profession, lost both her legs from below her knees and each of her hands. 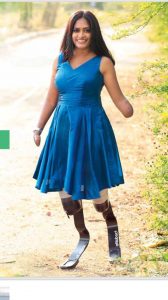 The tragedy came calling in 2013, when pregnant with her first child Shalini had just returned from a vacation in Cambodia. She suddenly fell ill.  But the mild fever quickly developed into something far more serious and Shalini was diagnosed to have developed an acute case of Rickettsial with morts – a rare bacterial infection. She lost her baby and months later she would lose both her arms and legs to the rare disease.

Today, Shalini is an avid runner who has run in races. The quadruple amputee took part in a prestigious TCS open 10k marathon run recently – just three years after fighting with the disease.